Can I Compost Pine needles and cones?

(From the Garden waste category | No comments yet - start the conversation)
Yes! 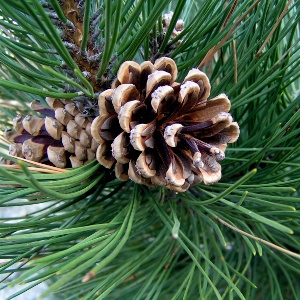 Yes, you can compost pine needles and pine cones – though it might take a while.

Because needles are slightly “rubbery” and tough, they’re quite resilient to the usual composting bacteria so take ages to breakdown: shred them first if you can (either in a proper garden shredder or run them over with the lawnmower), or just be prepared to wait.

If you have a lot of needles, avoid dumping them in the compost in one thick layer: they can be pretty dense in huge numbers and can cut back the airflow to the heap. Either mix them in with something more air friendly (such as leaves or scrunched up newspaper) or dig them into the heap to avoid layering.

Alternatively, take advantage of their slow rotting, and sprinkle them over muddy paths.

One thing to note: It’s a myth that pine needles will make your soil more acidic. Yes, they are generally quite acidic when fresh/on the tree so composting a lot of fresh needles may make your compost more acidic in the short-term. However, their acidity wanes considerably after they’ve left the tree – adding fallen/dry needles to your heap won’t disturb the balance too much and once composted, they’ll have little impact on the ph of your soil.