Can I Compost Brussels sprouts?

(From the Vegetables category | 1 comment - join the conversation)
Yes! 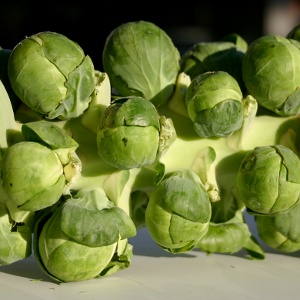 Yes, Brussels sprouts can be composted.

(In fact, the ‘Compost This’ team would very much recommended composting them instead of ingesting them. Bleugh.)

The outer leaves will rot down fairly quickly; the supposedly edible buds will take a little longer – chop them in half if you want to be rid of the evil things more quickly.

Cooked Brussels sprouts can be composted as long as they’ve not been cooked with anything on the “don’t compost” list – like meat or with lots of oils/fats – because those things can attract rats and other unwanted visitors to your heap.

If you’ve grown your own, you can also compost the stems – they’re pretty tough though so will take a while for them to rot down. Chop them up a bit to both speed up the composting process and to avoid them clogging up your compost heap in the meantime. Also, whatever you do, do NOT use the resulting compost to grow more Brussels sprouts — there is no horticultural reason but if we’ve not made it clear enough already, BRUSSELS SPROUTS TASTE HORRIBLE so you should just grow something nicer instead ;)