Can I Compost Limes?

(From the Fruit category | No comments yet - start the conversation)
Yes! 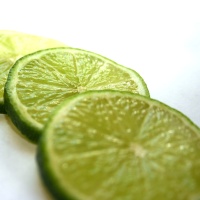 You can compost limes – but not in huge amounts and there are a few things to keep in mind.

Firstly, the rind/peel is a great protective layer for the fruit – perfect for its journey to us but a hindrance to speedy composting. If for some reason you’re throwing away whole fruit, split them open to aid decomposition.

Secondly, too much citrus fruit/peel can disrupt the balance of your compost heap. If it becomes too acidic, it might cause problems for the bacteria that breaks the stuff down into compost.

Also, many types of compost heap worms or wormery worms such as tiger worms don’t like d-limonene, an antiseptic substance found in fresh citrus peel. The d-limonene disappears as the peel rots though so your worms will prefer it if you leave it out of the wormery/compost heap until it’s green and furry.

Basically, the odd bit of citrus fruit is fine but too much – for example if you’re making acidic juices from a lot of fruit every day – might cause problems. (Some people keep a separate compost heap/bin for problematic stuff – it’ll compost down eventually and won’t get in the way in the meantime.)

In the future, if you don’t think you’ll use up limes before they’ll go off, squeeze them and freeze the juice in ice cube trays for use in cooking, or slice them into wedges and freeze, to use as combined fruit and ice in the summer’s drinks!