Can I Compost Dried flowers?

(From the Household waste category | 2 comments - join the conversation)
Maybe 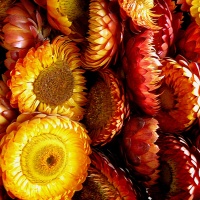 Some parts of dried flower arrangements can be composted – it depends how it’s been put together.

The actual flower bits and any moss used to cover the base can be composted – they’re just old, dry plants after all – but if the flowers have been mounted on wires, the wires should be removed first (they can be snipped off with sharp scissors).

The foam base should not be composted – they’re usually a type of synthetic foam and though they will crunch down, it’s not something you want in your compost.

While we’re on the topic of everlasting flowers, artificial flowers – ie ones made from plastic – should definitely not be composted. Silk flowers should probably be avoided too: they often including synthetic fibres or have bits of plastic for support.